An Intern’s Perspective on Mental Health 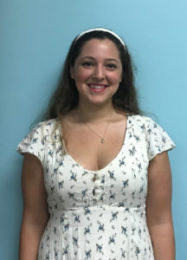 This post was written by Hannah Silverman, a student at the University of Kansas who participated in the Leadership Tomorrow intership program through the Jewish Federation of Greater Kansas City. She partnered with the Greater Kansas City Mental Health Coalition, where she primarily worked on the You Be You teen mental health campaign.

I didn’t know what to expect when I started my internship for the Mental Health Coalition. I remember friends and family asking me all the time what would I do, what was my role as just a summer intern, what’s the end goal? I would just shrug it off with a simple, “I’ll find out when I start,” and change the subject. The truth was, I had no idea. I knew very little about the Mental Health Coalition or the You Be You teen campaign. Going off of just my interview questions, I learned that they were partnered with Jewish Family Services and helped the community with mental health issues. On my first day, though, I realized that there was so much more to the organization than just those two facts.

For starters, the goal of the Mental Health Coalition is to eliminate stigma. The biggest impact of stigma around mental illness, or wherever stigma shows up, is isolation, shame and the feeling of being separate from the support and care of loved ones and community. For the Mental Health Coalition, we wanted to reduce the effect of stigma around mental illness. It’s surprisingly more common than most people realize, with a one in four chance that a person will be diagnosed this year. With these kinds of numbers, it’s important to make clear that having a mental illness is not a failing on the client, it’s just an illness that needs a different sort of treatment.

My favorite part was working on the You Be You teen campaign. The entire campaign is geared towards teenagers, helping them work through their own mental problems. Growing up, it gets hard feeling like your troubles or flaws are looked down on just because you’re young. But with the You Be You teen campaign, the imperfections that you think you see in yourself are actually celebrated. That’s even where the name comes from: you be you, meaning you are exceptional just being yourself.
So, in short, I really gained a lot more from this organization than I thought I would. I helped reach out to local high schools to be a part of the You Be You teen campaign. I drafted blog posts to talk about the Mental Health Coalition and all the great work they do. I became an active member of my community, not just for myself, but to impact others.